We have with us today Abner Senires, author of the cyberpunk futurenoir series KAT AND MOUSE – Guns for Hire. K&M is a fast-paced, spare, sometimes violent and often hilarious series of tales. It was written as a weekly serial and is now available in paperback and e-book format. 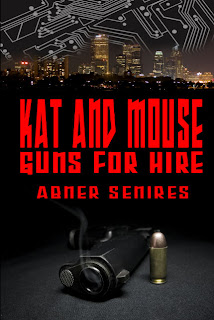 2042. Bay City, California Free State. Kat and Mouse are ronin--street mercenaries--who like cake runs. Simple jobs with quick and large payouts. That's what these were supposed to be. Cake runs. But when the Duo sign on, they suddenly find themselves targeted by a biker gang, a team of corporate commandos, a cybernetically-enhanced special ops agent, a stalker, a band of kidnappers, and a Japanese crime syndicate. And they all want the Duo out of the way. Permanently. Now these sassy sisters-in-arms must survive the onslaught and still get the jobs done. Because in the Biz, it's get paid or get dead. As usual, Kat and Mouse are going to do things their way. Heaven help Bay City...
Following is an interview with Mr. Senires. My questions are in bold to make up for the fact that, in real life, I sound like an eight year old girl.
Let’s start with the most pressing question, Abner: why do you hate pants so very much?
I don't technically hate pants. In fact, some of my best friends are pants. But sometimes, I'm much more comfortable in shorts. I attribute it to my island-based ethnicity.
Now you're probably wondering what pantlessness has to do with writing. Well, it all goes back to an article I read on freelancing several years ago. The author equated freelance writing with the phrase "no pants 'til noon." Or something along those lines. So now, when I think about writing full time, I think about no pants.